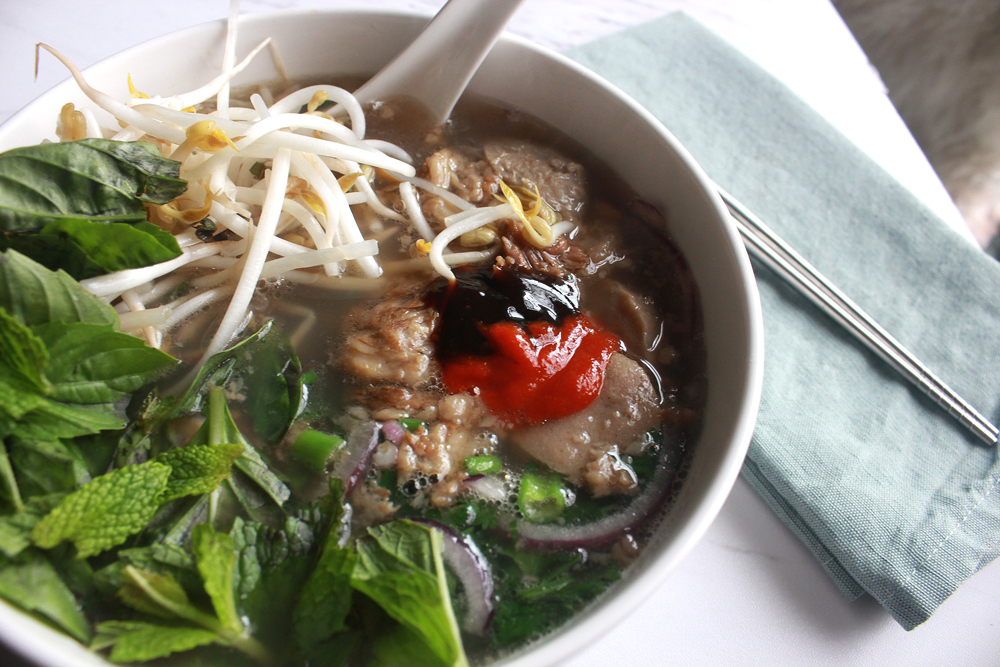 Hi! It’s been a while! Hope everyone is doing well. Okay, enough of that. Let’s talk about pho.

Vietnamese cooking and recipe has been mostly an oral tradition — and actually, part of the reason I started this blog was in hopes that it would become a repository for family recipes that I can add to at leisure. Because recipe-sharing is mostly oral, there’s not really a definitive “pho recipe” in my family. Everyone has their own little quirks and adamant beliefs when making their own pot for the family. It’s important to know this because this recipe (and other recipes you may stumble across) is not gospel so if something seems a little off to your palate, feel free to adapt and adjust.

Here in this post, though, I will give some notes of things to look/taste for. This recipe mixes elements from my mom’s my aunt’s respective methods of making pho, while also bringing in some of my own preferences.

So here in Seattle, which has a solid Vietnamese population but isn’t the kind of Vietnamese hotspot that San Jose is, our pho shops do a really solid job of putting out good quality soups. I’ve eaten pho a number of times in Vietnam, and I think I can say that Vietnamese American renditions tend to be equally as good if not sometimes better. I think part of that can be attributed to the quality of beef (and the fact that it’s relatively plentiful here) — and also the fact that pho is the absolute most well-known bit of Vietnamese cuisine. Everyone eats pho nowadays, so I think because of the overwhelming popularity of it, Vietnamese Americans have more of a stake in doing it right, in terms of authenticity.

For this reason, I wanted to put out a recipe that is a little different from what you’d get in a restaurant. I would call this soup stock full-bodied, which might be a code word for fatty. And it is fatty! There’s a lot of marrow fat that renders out from the beef bones during the long simmering processes and many recipes (and many Vietnamese restaurants) tend to skim all of the fat out. I skim about 80 percent of the fat out, but leave a little in on purpose to give the stock a little something-something extra. And this used to be the way that my mom made pho and how my family ate pho for years and years.

(I say used to because in recent years as my parents get older, they have gradually adapted their recipes to be healthier and lighter, often at the expense of flavor. Haha.)

This is Southern (Saigon)-style pho, which is like, the daughter of Northern-style pho. The daughter is far more pimped out and decorated than her mom. Both kinds are great, but I have a particular affinity and loyalty to the Southern-style because it’s where my family’s homebase in Vietnam is.

I don’t strain my stock, so there are a lot of “bits” floating in the soup, which I think could be a little like, “Whhaaat?” to people used to the crystal clear soup stock that you get at restaurants. This pho stock recipe is not delicate. It’s not subtle.

It’s salty, fatty, thick, and there are textures in there. Check out the little pot of pho stock below, which has meatballs and also softened cartilage, tendon, and marrow fat floating in it: 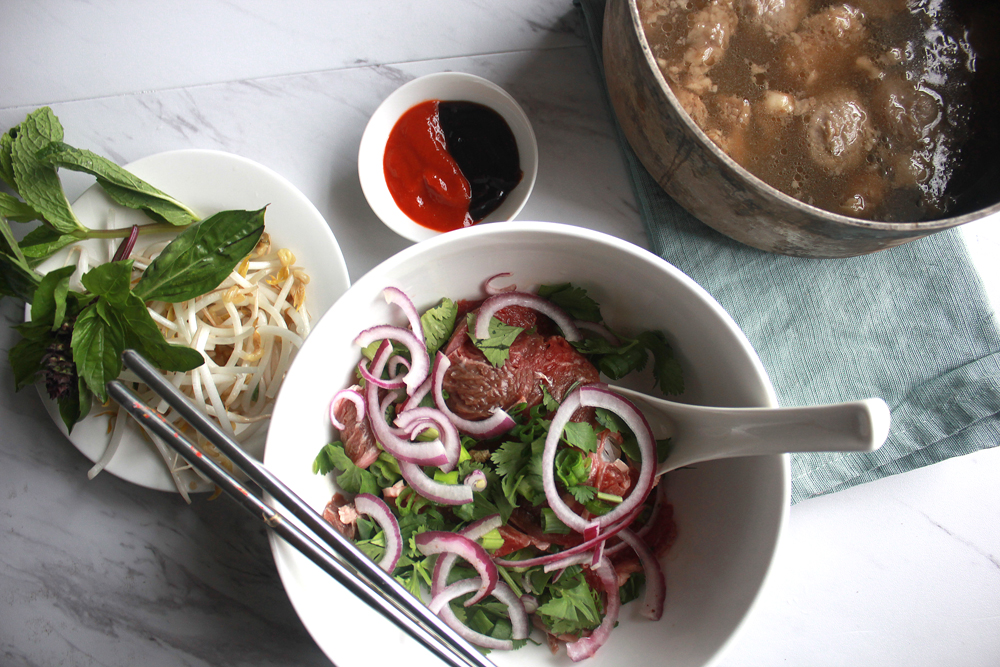 You’ll also notice that there is straight up some raw beef slices in the bowl. These slices would get gently cooked when the boiling hot soup stock gets poured over the bowl — like fondue. This is also how restaurants cook these meat slices, I think, but maybe people don’t notice because the beef is brown and cooked by the time it arrives at the table?

A note on garnishes and veggies:

Vietnamese tend to add more veggies and herbs than Americans, so I feel like the garnish plate that you get in restaurants is sometimes paltry because these restaurants have adapted to American eating tendencies. But at restaurants, I generally pick off all the herbs and all the sprouts and they all go into my bowl. In my photo up there, it’s not a great representation of the amount of sprouts and herbs go into my bowl because I was trying to keep this stuff photogenic, duh. In real life, it’s piles and piles (and in fact, off camera, there was a bundle of mint, basil, and sprouts just chilling in a corner, waiting in the wings for after the photoshoot — when I would eat them.)

So I’d encourage people to put in more greenery and more sprouts into the bowl. Vietnamese food is very much a near-equal balance of cooked food paired with raw vegetables and herbs. The fresh green zip of the herbs and the watery crunch of the bean sprouts will also help cut the thickness of this fatty stock.

Core garnishes include Thai basil, mint, sawtooth herb (ngò gai), bean sprouts, sliced onion, green onions, and cilantro. With the exception of the sawtooth herb (which can be hard to find, even in Asian grocery stores) I wouldn’t skip out any of these herbs. (Yeah, I’m talking to you, cilantro-phobes! ;D)

Hoisin and the Rooster brand of sriracha are pretty much staples. Fun fact: The Rooster brand of sriracha is much better in the States than the stuff available in Vietnam, so count yourself lucky. Sometimes people add chilies or jalapenos to kick up the heat and you’re welcome to do that. I just wouldn’t overdo it on the hoisin and sriracha. I think the hardest thing for me when I eat pho with non-Vietnamese is to watch how much hoisin and sriracha people dump into their bowls. You’ll see that it takes a long-ass time to make the soup stock. It’s kind of a crime to kill all that hard work by dumping in a crapton of hoisin sauce into the soup.

People also squeeze a wedge of lime into their pho, which I have no problem with. I don’t do that, though, because I don’t like that overly sour hit of acid. But to each their own on that one! It is traditional to squeeze lime, so you’re good there.

See all my meat and fat bits floating in the soup? These are the bits that fell off my bones. Yum! 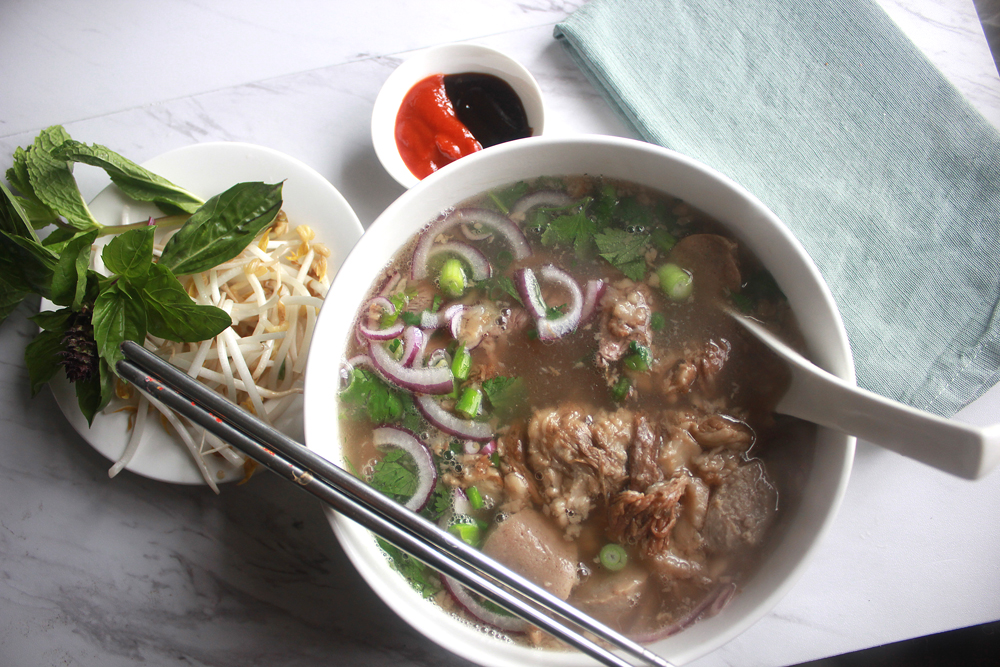 There’s gonna be a hard part in the recipe that calls on you to season to taste. It can be hard if you haven’t been mainlining this stuff your entire life. Broadly, pho stock should be saltier than you think it ought to be, because once the noodles and fistful of garnishes go in, they will dilute the entire bowl and it may come off bland as a result. To be very safe, it’s not a bad idea to season to what you think is good — and then maybe make yourself a teeny, itty-bitty bowl with a bit of everything and taste it that way to see if it’s bland or if it’s good to go.  Then you can adjust the big pot accordingly. And then commit it to memory, because that will be what you’ll be hitting the subsequent times you make pho. 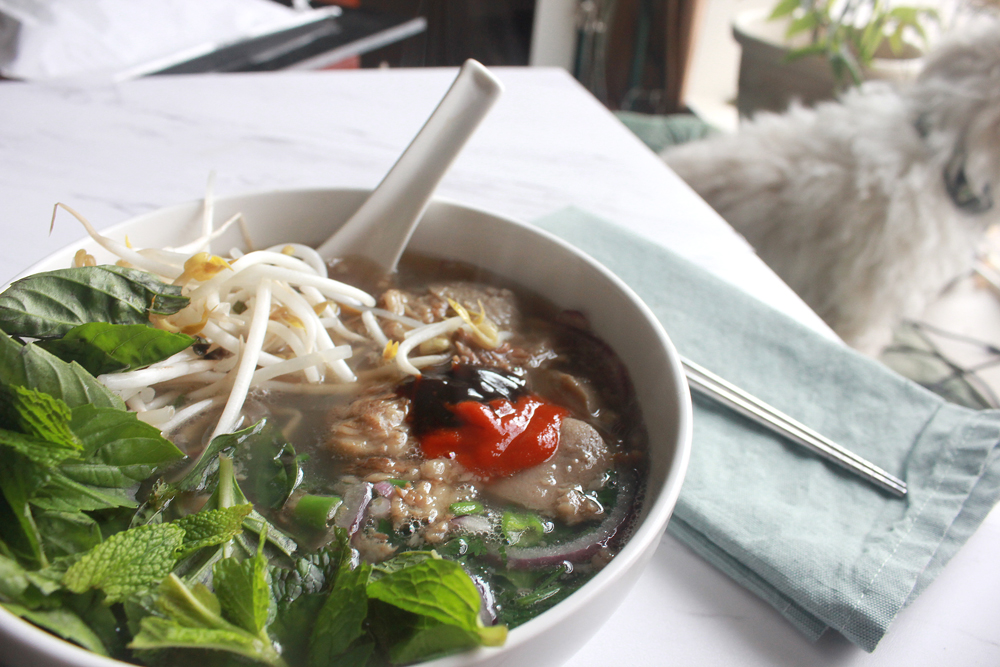 Here’s a video I made of how a bowl gets composed. This isn’t gospel though. The only real key here is making sure the raw beef gets cooked. Otherwise you might get an upset tummy. But it would be worth it, wouldn’t it?