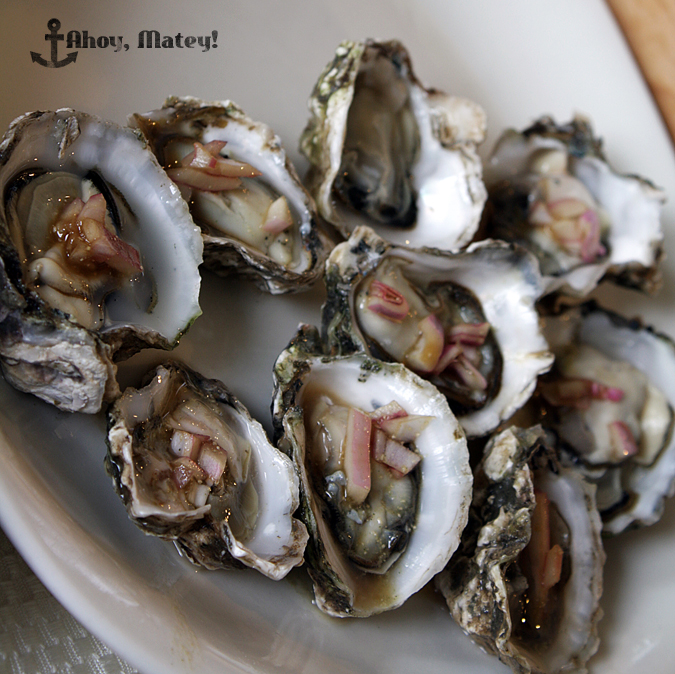 Okay, so not really.  But they are lovely and amazing and wonderful.  When I was young, my family would cook big honking Pacific oysters on the grill, which were great in their own right. However, my perspective on oysters changed upon a visit to a local well-known seafood restaurant here in Seattle.  It was during an all-you-can-eat brunch.  Raw oysters on-the-half-shell were sitting on ice.  I grabbed one.  And it was an amazing discovery for me, that you can eat them raw.

Since then, I rarely cook oysters, instead preferring them clean and raw. They are fantastic unadorned, but sometimes I like them with a mignonette, which contains acid to cut through the brininess and bring out the oysters’ natural sweetness.  This soy mignonette is one of my family’s go-to oyster toppings as it’s easy and uses ingredients we have on hand.

If you’re a newcomer to raw oysters, it’s best to choose a smaller variety.  Not only are they easier to slurp down, they are also much easier to shuck.  Oysters should smell like the ocean.  They should not smell fishy or very strong (that means they have died and are decaying.).  The shells should not be opened when you buy them either.

Raw oysters with soy mignonette
Recipe Type: Appetizer
Serves: 6
Make the mignonette a few hours ahead of time, if you can, for the flavors to mellow. This recipe can be doubled or halved.
Ingredients
Instructions
3.1.08 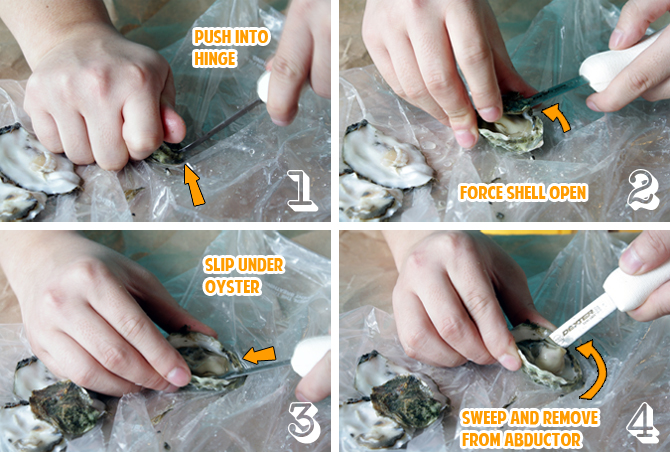 It’s best to buy an oyster knife.  Its blunt blade is thick and will withstand the pressure you apply to pry open an oyster without bending.  Additionally, it has a curved tip that helps you wedge and hook the space in between the shells.

Before shucking, lay down some plastic, as it will get pretty messy and wet.  Also wear a thick glove on your “oyster-holding” hand if it makes you feel more comfortable or helps you get a better grip on the oysters.

To shuck an oyster, you want figure which end goes up.  The bottom of the oyster will looked cupped compared to the top side, which is flat. To open, force the tip of the oyster knife right next to the hinge, in between the shells, on the backside of an oyster.  Pivot  the knife to crack open the hinge.  Sweep the knife in between the shells, loosening the top shell enough to pry it off the rest of the way with your fingers, taking care not to damage the oyster meat with the knife.  Try not to lose any of the liquid inside (because it’s tasty!).  After taking the top shell off, sweep the knife under the oyster meat to dislodge it from its abductor muscle.  Done! 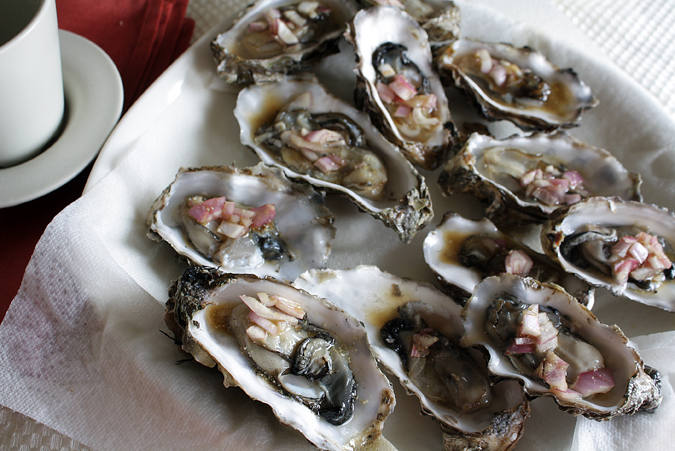