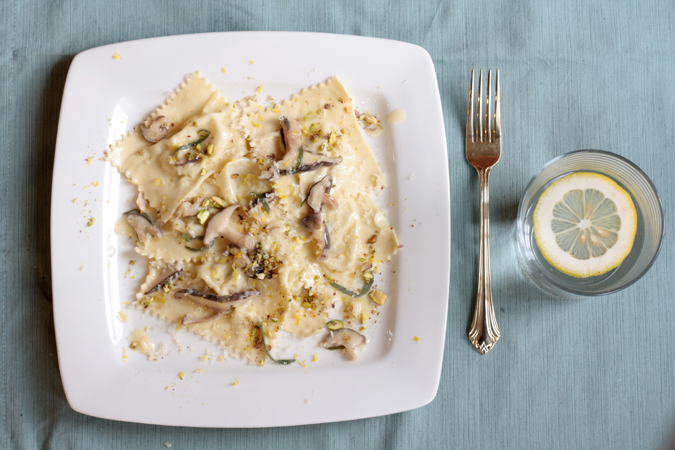 This ricotta, pistachio, and golden raisin agnolotti with shiitake sage butter sauce really clued me onto the fact that I’m prone to creating recipes that take a crap-ton of labor and take a crap-ton of time.  I wrote the preparation time for this recipe at four hours.  It may take you less, and it may take you more.  That time was based on how long it took me, from start-to-finish.  For that reason, I think this recipe would be great to make with a friend.  Then those four hours in the kitchen won’t feel lonely, and you can split the work.

Haha, I can imagine the invite: “Wanna come over to my house and spend a few hours making pasta with me before eating it?  Yeah?  Yeah?”

I think the effort is worth it, though, as it usually is for fresh, handmade pasta. While this recipe is not low-fat (I shocked myself when I backtracked and calculated how much butter went into it), the trade-off is that it is very comforting and homey.  AND you can tell your friends and family it’s vegetarian.  And leave it ominously at that.  (People love assuming that vegetarian food is healthy, am I right?)

The inclusion of sage makes it feel like autumn and reminded me that Thanksgiving is just around the corner.  The small lemony presence in the sauce and in the zest cuts the richness and gives it a nice floral-like quality.  And shiitakes.  Man.  Mushrooms are just awesome.

Is it worth the effort to go hunt down golden raisins?  I’m not sure.  I was being superficial and just picked them for the color.  I loved how the yellows and greens and white and browns contrasting together.

Here be the longest recipe EVER:

Ricotta, pistachio, and golden raisin agnolotti with shiitake sage butter sauce
Recipe Type: Pasta, dinner
Cuisine: Italian
Prep time: 4 hours
Cook time: 40 mins
Total time: 4 hours 40 mins
Serves: 8
Time-intensive! For those who don’t like the idea of standing in a kitchen for four hours straight, it’s best to separate this recipe into parts and tackle it over the course of two days. (You can also cut this recipe in half and serve 4 people instead.)
Ingredients
Instructions
Pasta
Filling
Putting it together
Sauce
Topping and serving
3.1.09 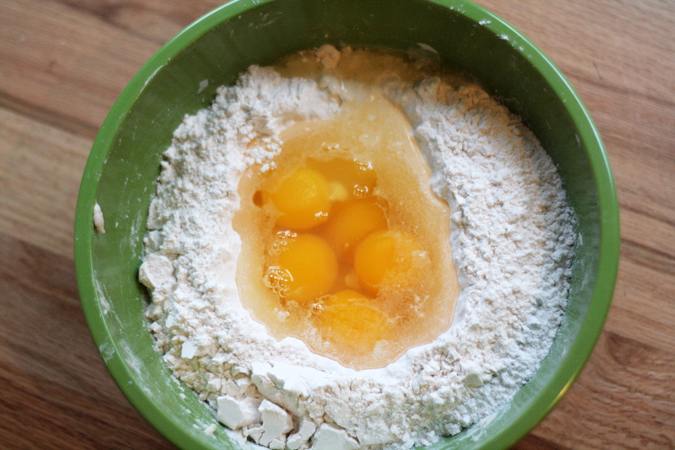 I often make pasta in a bowl because when I make it on the counter, I make a big ol’ mess. 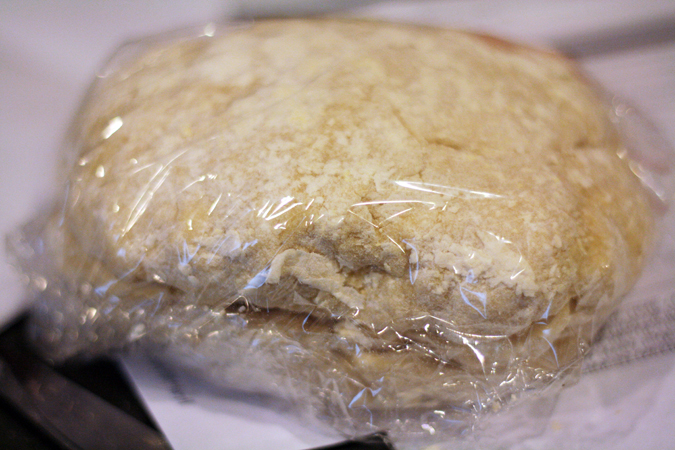 The pasta is resting.  Shh!  Don’t disturb it. 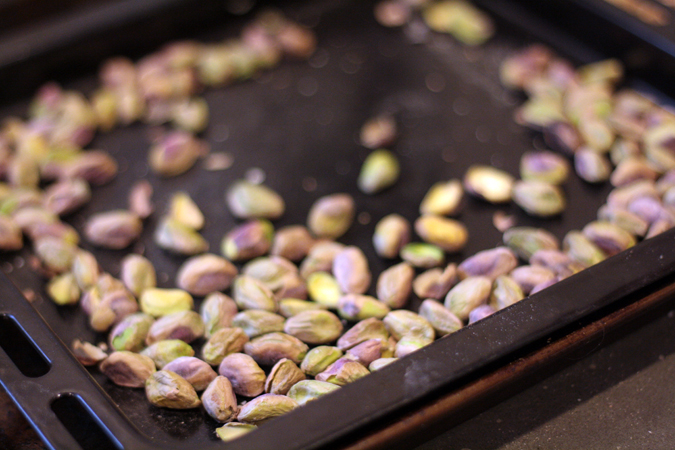 I picked pistachios for this recipe for color first.  Then for taste. That said, you can substitute just about any nut you please.  Walnuts or hazelnuts would be pretty neat, I think. 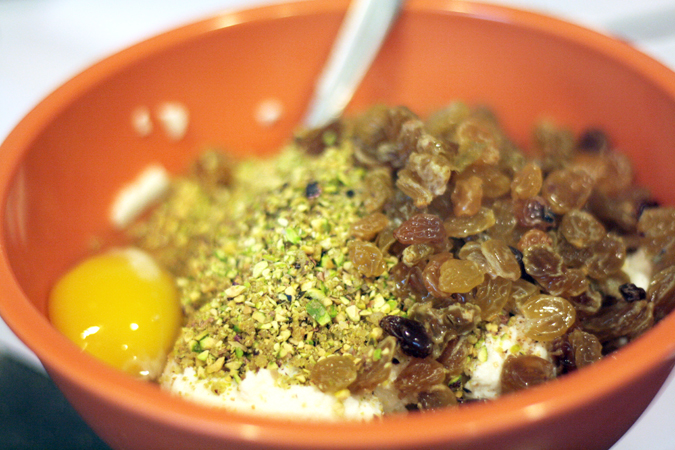 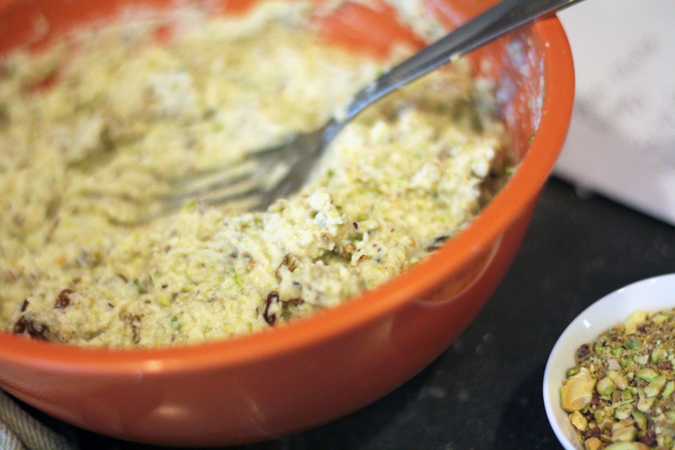 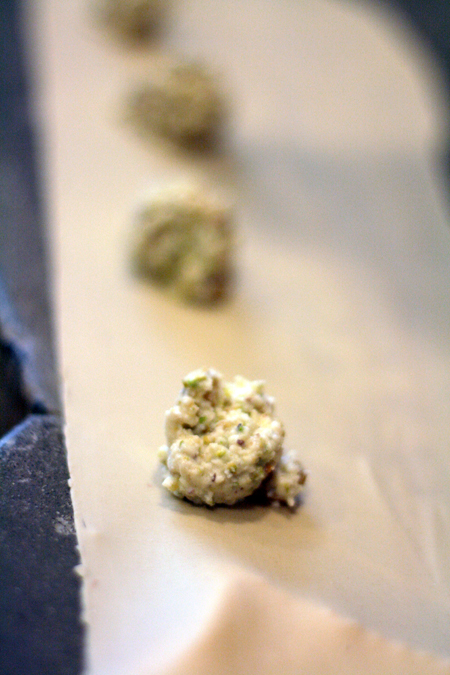 My fillings were FAT teaspoons, so what happened is that I ended up with 3 feet more pasta than I had filling for.  Have no fear though, I’ll have a recipe for the leftover scraps posted up soon. 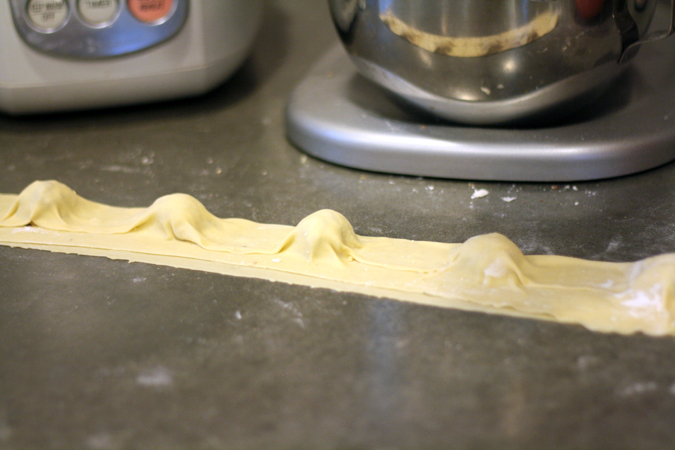 Oh, and a note, agnolotti is made up of one sheet of pasta that is folded over a filling.  Ravioli are two sheets pastas that sandwich a filling. 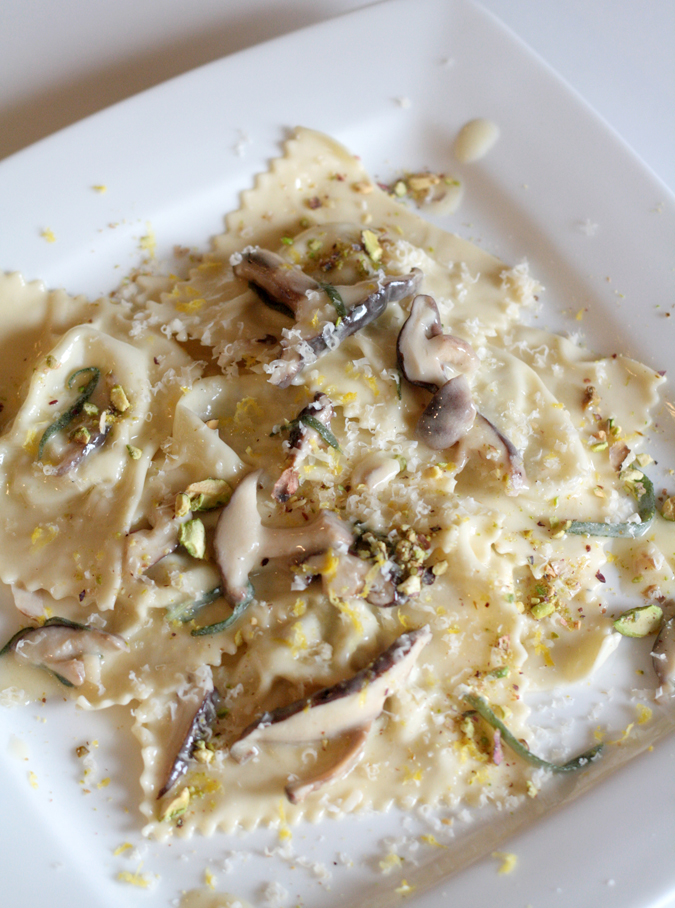 The pasta should be lightly sauced.  It’s not supposed to be drenched like Olive Garden alfredo style.  So don’t be alarmed if you think that there isn’t enough sauce.  There is!  You want to taste the pasta anyway, not the sauce. 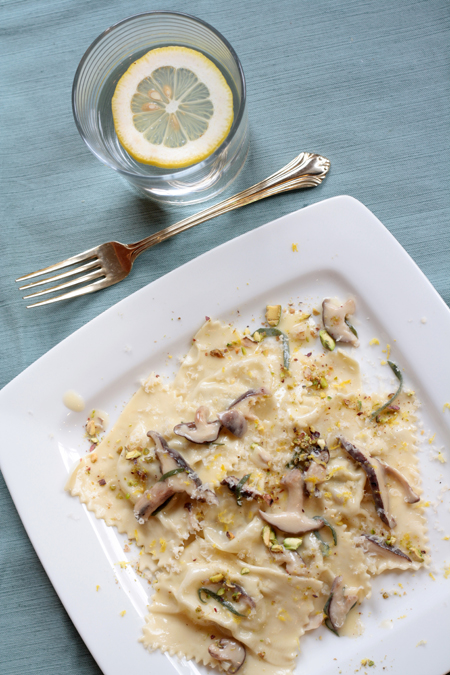 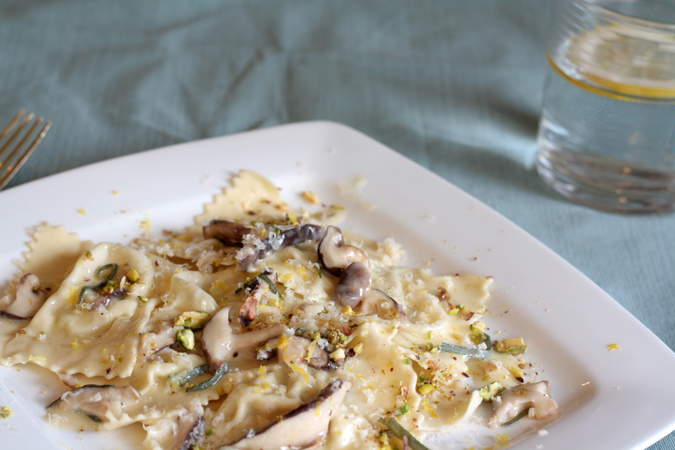 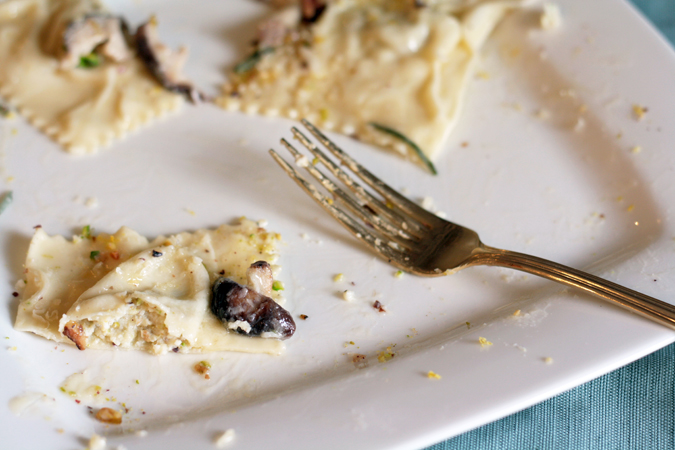 This is a picture of my test plate after I ravaged it.  It’s not the prettiest picture, but I think its yummy quotient is quite high.