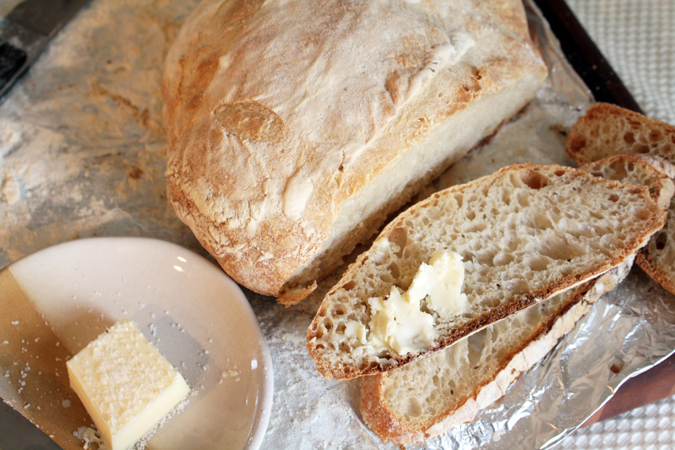 This sourdough is the best bread I’ve made with a wild yeast starter.  It’s probably even the best bread I made ever. But before we get into that, let’s back up a little.

It’s OG (Original Gangsta) yeast.  It’s what humans have used to leaven bread before the advent of commercial yeast.  It’s probable that wild yeast for bread was discovered when a person, thousands of years ago, left her flatbread flour mash outside in the warm air, accidentally, for a while.  When she came back, she saw that the mixture had bubbles in it.  Yes!  Yeast was growing and multiplying in her grain mash.  As an experiment, she baked and and found that it was fluffy and tasted awesome.

There’s some debate over where the natural yeast spores comes from.  Some people say the air.  Other people say it’s in the grain.  I tend to believe it’s the latter, as I’ve found that using bad grains (bleached flour) in your starter and bread kills the starter’s bread-raising properties. 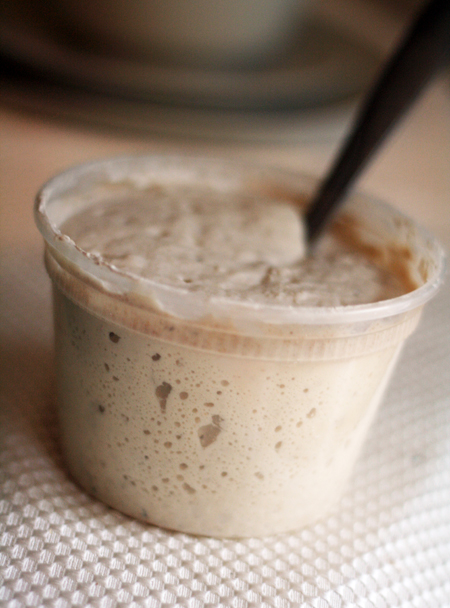 Why bother with a starter when there’s commercial yeast available?

Commercial yeast is predictable, consistent, and takes a much shorter amount of time to raise bread.  Breads leaven with wild yeast take considerably longer, true, but it also creates bread with more flavor and a nicer aroma, in my opinion.  Wild yeast starters are often called sourdough starters; some breads made with starters do have a slight sour tinge that many (me included) find quite pleasant.

(But, it should be noted that bread and any other baked goods made with a wild yeast starter doesn’t have to be “sour.”  It can be manipulated and coaxed into different flavors.  Wild yeast is very malleable. And actually, a lot of “sourdough” breads we find at the grocery store are laced with vinegar or some other acid for the sour flavor.  I kind of doubt they are true sourdoughs.)

Lastly, you just feel deeply satisfied when you’ve made bread from a starter.  You feel self-sufficient and it’s an art form.

So enough blathering. How do you get a starter?

1. You can buy one.  Yeasties in starters are like sea monkeys in that they can be dried and suspended indefinitely.  So starters that you buy online will be in a powdery, dried form.  You just add water and the yeasties spring back to life.

2. You can find a local bakery that will give you some or sell you some.  I actually went this route before.  I have a kind friend who works at a restaurant and she hooked me up.

3. You can make your own!  I’ve also done this before and the current starter I have is one I made mixed with the one I got from the restaurant.  (It was too much for me to keep two going.)

I didn’t take pictures from the last time I made a starter, so I created a handy infographic for you guys.  :)  However, there are nuances an infographic can’t convey, so I’ve added notes at the bottom.

Here are my tips, learned from many, many failed attempts at making a starter:

1. The flour is the most important component.  You can’t get a starter from bleached flour, which is flour that’s been processed to look super white (and due to the bleaching process, is stripped of its natural “wheatiness,” which means no yeast spores to draw from).   Putting bleached flour in a starter will kill it.  I’m not sure why, but bleached flour is usually cheaper than unbleached.  It seems weird because you’d think the added bleaching process will drive up cost.  But anyway, sacrifice a few extra bucks and get unbleached all-purpose or unbleached bread flour (the difference is the protein content.)  I use all-purpose.  :)

I started my starter with rye flour, which some people say have more yeast spores to draw from.  Your starter is very delicate and weak in the beginning, so it needs all the help it can get.  (Later, it will basically become unkillable, unless there is serious neglect.  So yay!)  I found the rye flour at my local chain grocery store, in the bulk bins.  The brand was Red Mills.  I checked the date on the bin–the flour was ground in the last few months.  So I just scooped out as little as a 1/4 pound and was on my merry starter-starting ways.  (FYI, any whole grain flour will do.)

2. The actual measurement of flour to water isn’t so important as it is to keep doubling the amount of proto-starter.  So that’s why the infographic says you have to toss out half of the starter each time, before adding more flour and water.  That’s so the yeasties have enough stuff to snack on.

3. Some people say the chlorine in tap water can kill the yeasties.  This wasn’t a problem for me, here in Washington state.  I think if your water is drinkable from the tap, you’re okay.  But if you want to be absolutely sure there are no water issues, use mineral water or spring water.  (But don’t use distilled water!  It’s totally sterile and will not help the yeasties one bit.)

4. Around day 3 or 4 (the infographic is far more precise than this, but keep in mind that it’s different for everyone due to location and temperature and grains used), the starter will look like it totally died.  And if you’re like me, you will be totally discouraged and devastated.  But keep on with the twice-daily feedings!  The reason the starter appears to die because all the activity leading up to that point wasn’t due to yeast, but due to bacteria.  It’s a totally cruel fake-out, but getting to the “DEATH!” point is good because it means the bacteria are subsiding and giving way to the eventual yeast.

5. You’re supposed to do all of this in warmish temperatures, but it will happen in cooler temperatures, too.  It will just take longer.

6. I started my mixture with pineapple juice instead of water, for the first three days.  I’m not sure it made any difference, but supposedly, the acidity of the juice helps create a nice environment for the yeast to grow and the sugars in the juice gives them something to munch on.

7. Once you get your starter going and it’s doubling after every feeding, it’s ready to bake with.  You can keep its twice-daily feedings at room temperature for another week or so, to build up the flavor a little more, or you can refrigerate it and retard the rising.  Then, you can reduce feedings to once a week!  Low-maintenance, right?

8. I’ve seen starter methods that call for commercial active dry yeast.  I don’t recommend doing this.  These are two different kinds of yeast and the ones you want for the starter aren’t the ones in the commercial yeast.  Putting that stuff in your starter might just make things take longer.

9. After you’ve refrigerated, before you can bake again, you need to go through two “feedings” and until the starter can double its size again.

Enough of this, where’s the recipe? 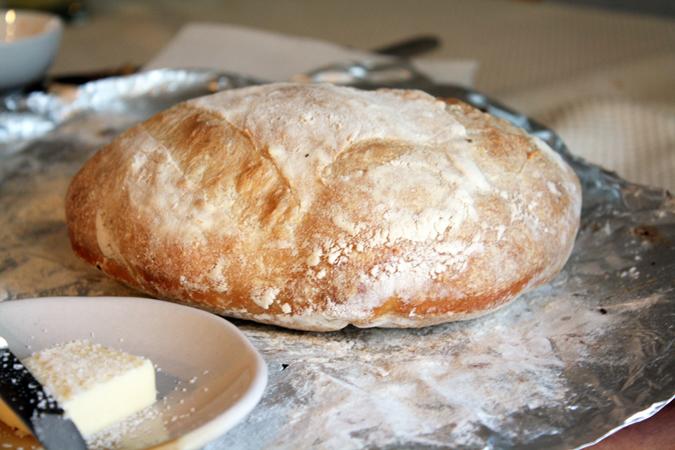 This bread has a long rising time because of the relatively small amount of starter I use.  I use a small amount because I like for it to develop more of a “sourness,” and the longer rising time allows for that. 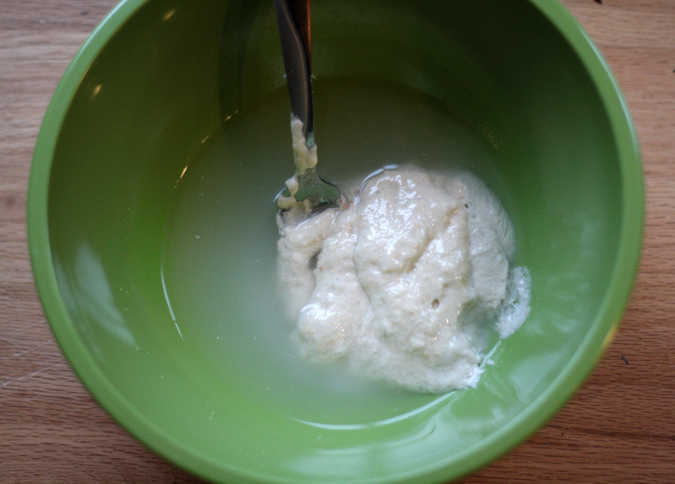 I’m a very non-precise person and bread-making requires a fair bit of precision.  The good thing is if you don’t mind being surprised over how your bread turns out, then experiment and it’ll usually be okay.

But for more precision: the consistency and texture of your bread will largely depend on the hydration level of the dough.  Hydration is a percentage, which is calculated by comparing the amount of water (x%) to the amount of flour (100%).  So if a dough requires 100 grams of flour and 60 grams of water, the hydration of that bread is 60 percent, which is about where you want to hit for standard every day bread.  I will probably talk more about this later, when I OBSESS over pizza dough and baguettes. 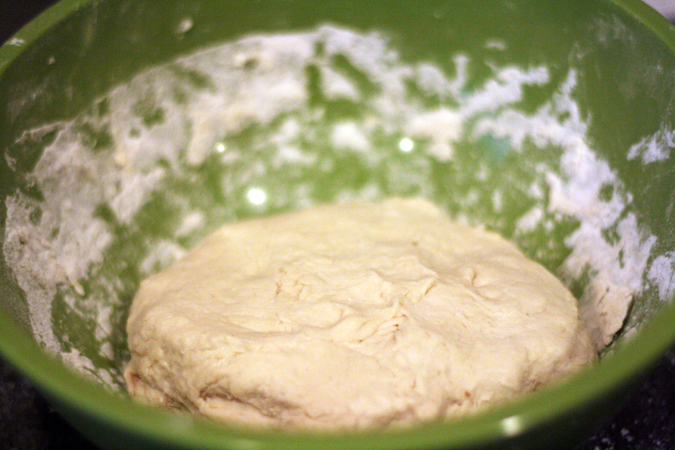 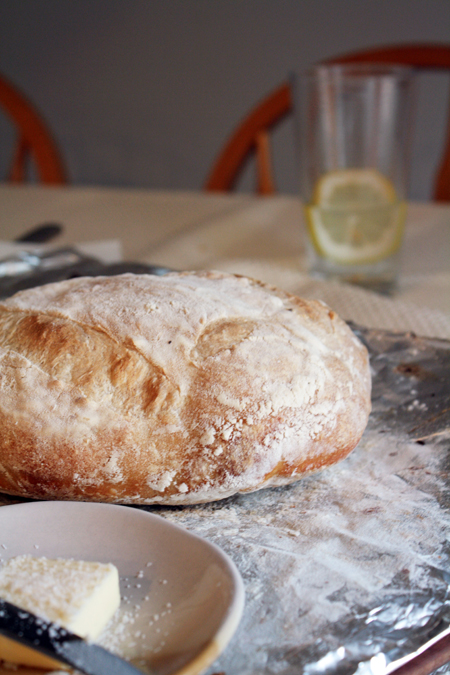 Look at the holes! 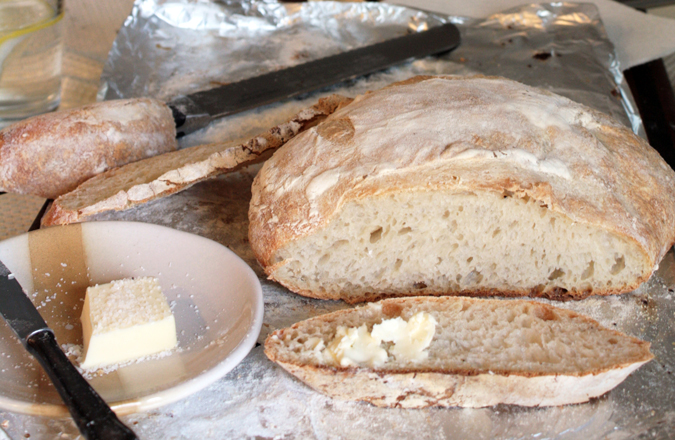 Additional resources on making a starter:

Michael Ruhlman and the red cabbage method
Didn’t actually work for me, probably because my flour was bleached when I tried this method.  This reportedly worked for a lot of people.  And Michael Ruhlman is awesome.

Pineapple juice method
This totally worked for me.

And here’s a ridonkulous amount of supplemental information from Mike Avery, friend to bread