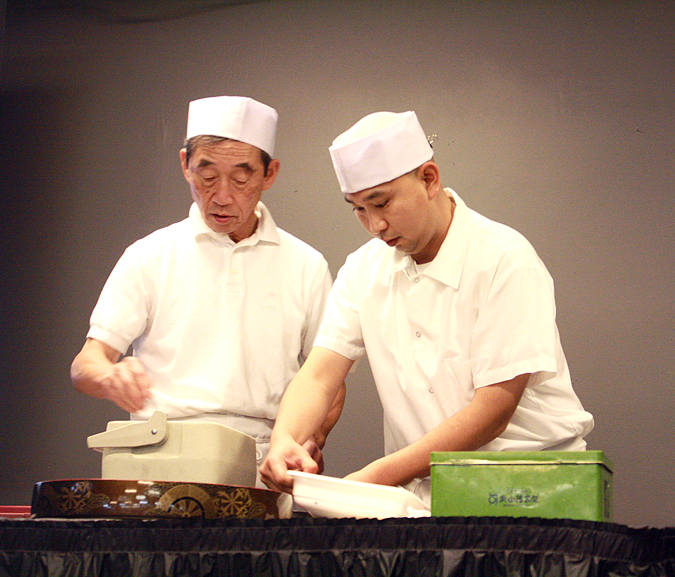 I hope you don’t mind, but I wanted to deviate from the usual recipe with this blog post to talk a little bit about sushi.

On Nov. 3, my friends and I went to an event, “How To Eat Sushi The Expert Way: Featuring Master Sushi Chef Shiro Kashiba.” The event was held at Nagomi Tea House in Seattle’s International District (which is a very unique and rich geographical area that comprises, mainly, Chinatown, Little Saigon, and Japantown) and organized by the Hokubei Hochi Foundation.

The event featured a history lesson on sushi, a primer on how to properly eat sushi, and samplings of Chef Shiro’s work alongside some sake.

In the 1960s, Shiro was mentored by Michelin-starred Chef Jiro Ono, which you may know from the documentary Jiro Dreams of Sushi. Shiro made his way across the Pacific and settled in Seattle, really pioneering the sushi culture here and becoming renowned himself.

Shown in the above photo with Shiro is Daisuke Nakazawa, who was in the Jiro film.  He was the apprentice that tried and tried again to perfect tamagoyaki, egg sushi.  At the end of the film, he got Jiro’s approval and I just let out this breath I had been holding in for him!  Daisuke is now in Seattle, working with Shiro, making tamagoyaki.  (Well, I’m sure he is incredibly proficient and makes many things, but he is now especially known for tamagoyaki.)

In-person, Shiro’s kind of super hilarious.  He showed us his impressive collection of knives at the event and cracked these deadpan jokes that just stunned you into laughing.  I would totally watch him do stand-up.

But you didn’t come here to read a journal entry!  Let’s talk about the food.

I understand that some might feel a little affronted at the idea that there’s a “correct” way to eat sushi.  After all, food can be a deeply personal, individualistic experience.  It’s hard to qualify the way someone eats as something that’s “wrong.”  It sounds a little elitist and is distasteful in that way.  I totally get that.

At the same time, I don’t think that’s the intent behind these “how-to” discussions.  I think the driving force behind someone’s desire to dictate a way to eat is due to the cultural or personal identity of the person.  They’re saying, “Hey, this is me on a plate and I really want for you to know me.  In order for us to really connect meaningfully, this is how I’d like for you to experience this.”

For instance, when I make a big pot of pho, there are hours and care spent making a really great beef stock.  It’s this traditional that all members of my family participate in and its generations and generations deep.  When I share that, I want people to experience the pureness of the stock.  It  would be hard for me if I presented this deeply personal dish and someone dumped a lot of hoisin sauce in it.  It would feel like the attempt at communication and at connecting was rebuffed, in a way.

So I try to learn about other people’s food preponderances and habits when I can, because there is that desire to communicate through food for me.  I don’t know very much about Japanese food, so this event was a great opportunity to learn about it.

Shiro may have been the headliner of the event, but Yasuko Nakajima was the star.  She was this sweet woman who is a sushi restaurant vet, who typed out dozens of pages of notes on her own time to present us, the audience, information about the food.  I’ve included fun highlights below. 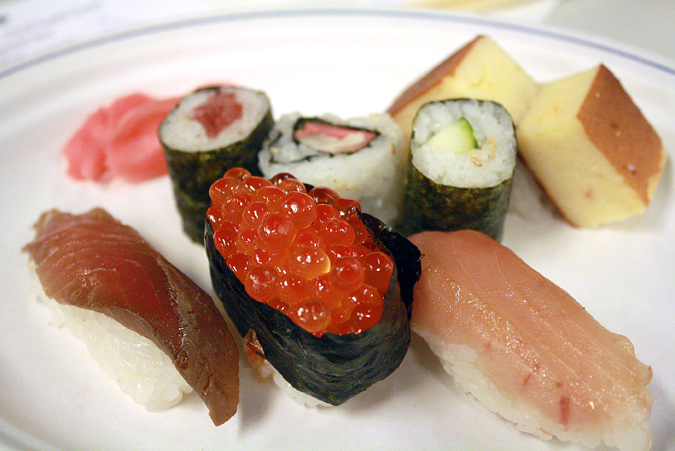 An assortment of Shiro’s sushi. The roe sushi was a favorite.

Sushi and the art of minimalism

Sushi was originally meant to be fast food, a fact I found fascinating because I always had this impression that it’s always been artful and meant to be savored.  That’s actually a newish development.  Back in the day, people created sushi as small bites so that it was portable and you could easily eat it with your hands and in one bite.  An experienced sushi chef will adjust the size of the sushi based on the mouth-size of the customer (basically going off of whether the person is a man, woman, or child, I think).

(The American in me is slightly uneasy with that.  Because I pretty much want to shove as much fish down my maw as possible.  Oh, gluttony!)

Sushi refers to the rice, not the fish.  Making sushi rice is truly an art.  You aim for rice that’s not packed too tightly and not too loosely.  It’s supposed to just crumble away in your mouth.  The texture of it is deliberate.  The amount of acidity from the vinegar is deliberate.  The hard part, I think, with making food that contains so few ingredients is that mistakes are hard to hide, so it takes a crazy attention to detail to make something really great.  And that’s why I say it’s an art form.

To me, sushi is best when it’s minimalistic.  Sometimes it’s tempting to get sushi that’s decked out with rainbows and unicorns — and those can be really good and have a place at the table.  But man-oh-man, have you seen Jiro Dreams of Sushi?  Simplicity is just totally gorgeous.

Also, sushi was originally finger food so it’s totally okay to eat it with your hands.

Apparently the stuff we get at low-to-mid-to-sometimes-high-end restaurants isn’t really wasabi, but instead, is a blend of mustard and horseradish powder, dyed green.  The real stuff is somewhat difficult to grow.  Roy Carver III grew it in Oregon for a time but I read that he has since shut down business because the demand for it wasn’t there.  Yasuko said that the sushi chef at high-end restaurants flavor the sushi with soy sauce and wasabi already and created it exactly how he wants for it to taste, so there’s no real need for the little condiment dish that we see everywhere.  My observation is that sushi is supposed to be far more subtle and cleaner than I’ve been eating it.  The horseradish powder stuff is a bit rough, so when you supplement with it, it kind of just rips through everything and mutes the fish, which should completely be the focal point.  That’s what you’re paying the big bucks for, right?  :)

Gari is a palate cleanser, or even a snack between servings of sushi.  But it’s not a sushi topping.  I was surprised when Yasuko brought this up because I didn’t realized people used it as a topping.  Interestingly, she also brought up a use for gari that I had never thought of.  She said that it’s okay uses gari as a “brush” to season gunkanmaki-type sushi, which is a sushi that has chopped-up or small ingredients that need to be fenced by the nori (seaweed). It’d be hard to swipe these in soy sauce, so you can use a piece of gari to pick up a bit of soy sauce and smooth it over the top of the sushi before eating. Yasuko also said that while sushi is already seasoned, if the customer really wants a bit more soy sauce flavoring, it’s okay to skim the top half of a piece of nigiri (fish-side down, in the soy sauce). She advises that we moderate the use of soy sauce in order to enjoy the full flavor of the fish.