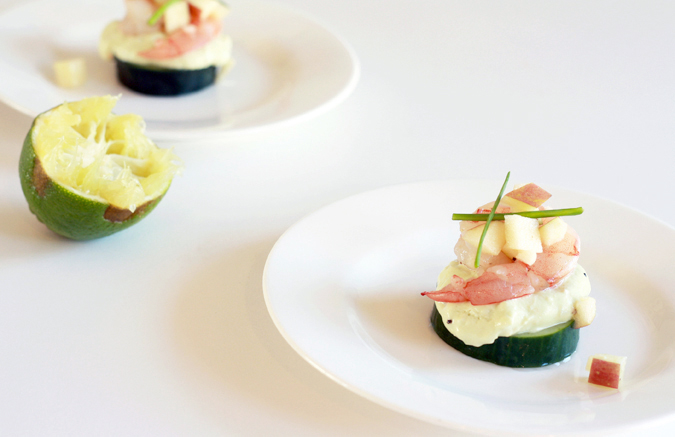 When it comes to party foods, I find seafood to be a kind of scary challenge.  I mean, I totally don’t care if I end up on the toilet that night because I ate questionable shrimp, but most people do care about that sort of stuff.  (Ha!)

Serving shellfish often comes down to how long you can keep it cold before setting it out and letting the masses devour it.  In the past, I’ve tried to set up food on a bed of ice, but that always ended up messy and melty and not worth the effort.  Over time, I learned that the key is being able to make a bunch of components ahead of time that can hang out in the fridge until you’re ready to compose and put them all together.

That’s sort of the beauty of this shrimp on avocado mousse and lightly pickled cucumber with apple salad (what a name!). The shrimp is cooked—poached—so it doesn’t necessarily have to be served the day-of.  You can prepare it a day or two in advance at your leisure and then put it together at the 11th hour, let it chill in the fridge until the 12th hour—and then you come out looking like a hero without a large amount of stress!

This dish is also healthy!  At parties, it’s easy for stuff to be carb-y so it’s always a good idea to offer up an alternative. 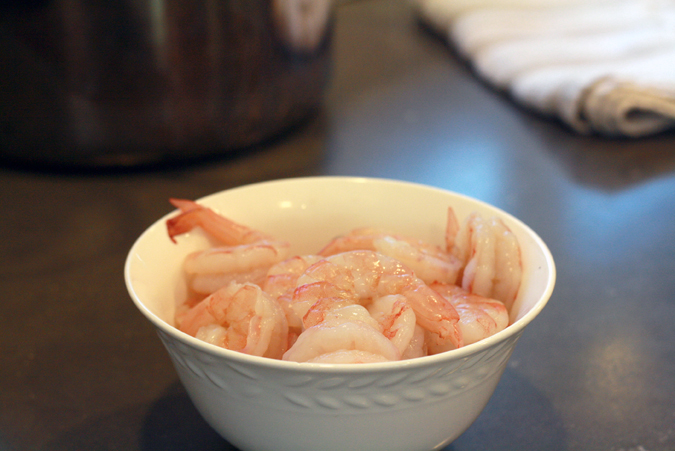 I like hard acid with seafood.  I just think it tastes great.  It wasn’t until my first visit to Red Lobster when I was a kid that I discovered that some people eat seafood and shellfish with LOTS of butter.  Up until that point, I grew up eating shellfish dipped in lime juice and black pepper.  To me, butter blunts the flavor of shellfish—it’s basically gilding the lily for me—whereas acid brings out its natural sweetness and brininess.