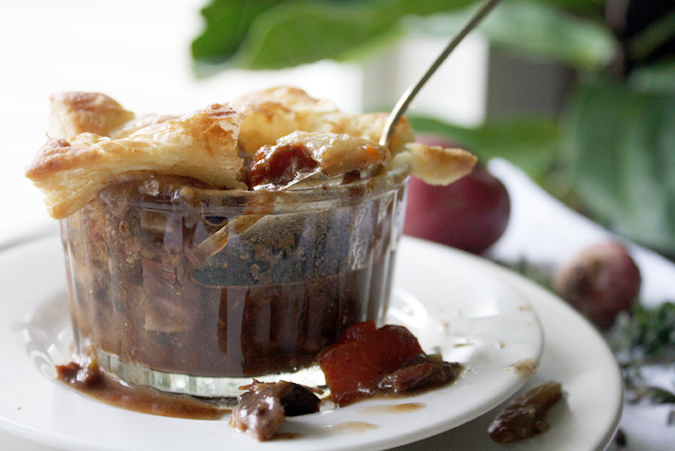 March 14 is Pi Day. March 17th is St. Patrick’s Day.  I decided to squish the two together to make an awesome steak and Guinness pi/pie.  To make things even more difficult, the numbers in this recipe’s ingredients list (not counting the clarifications in parentheses) sequentially list out the digits of pi.

This came about because I was setting up a dinner date for March 14 with my friend Brenna, who really, really likes math (and is probably awesome at it, but my puny non-math-mind can’t really tell you for sure).  She casually mentioned that she would like to bring a pie, since the 14th is Pi Day.  I was like, oh, it would be cool if the whole meal was centered around pie.  Cool and fattening.  So maybe it’s not a good idea after all.

Brenna was like, oh, we can do healthier pies, like make crusts out of hollowed zucchinis or cauliflower.

(This exchange was happening over email, so she couldn’t see how unenthused I was about that.)

And then I said something off the cuff about how we can go one further and make a pie using pi digits.  And then I realized I was crazy-talking so I was like, nah!  That’s a lot of work for something that might not taste very good.

Brenna expressed some sort of approval of the idea and said that such a thing was worth trying.

CHALLENGE ACCEPTED.  That was all it took.

I didn’t even acknowledge that I had internalized what she had just written.  I just started scheming and obsessing behind the scenes.

I didn’t want to make an obvious pie.  Brenna also can’t eat dairy, so I couldn’t use cream or butter, which actually really helps mitigate the heaviness of savory pies, so I had to work around that.  And I thought about how cool beer is and how cool steak is and how I really can take or leave St. Patrick’s Day and a PI/PIE was born!

Not going to lie, this recipe is super-duper contrived and the measurements are pretty inconsistent and frustrating (I go from metric to imperial to weight to volume and round and round and round.). The ingredients are also out of order — because I had to force out the numbers, guys.  I had to.  Otherwise, how can I really call this a steak and Guinness pi/pie?

No worries, I did put cleaner measurements in parentheses in the recipe.

Conceptually, this pi/pie totally rocks and works on a bazillion levels.  Pies are circular in shape.  Pi is this magical ratio having to do with circles.  Pi and pie are also homophones, which creates an atmosphere ripe for hardcore punning. 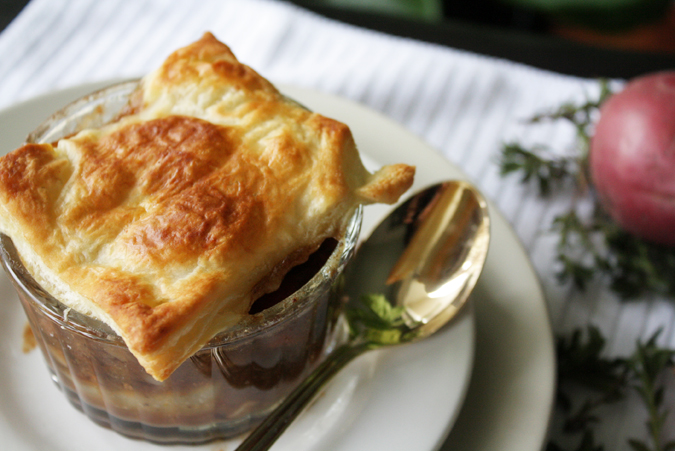 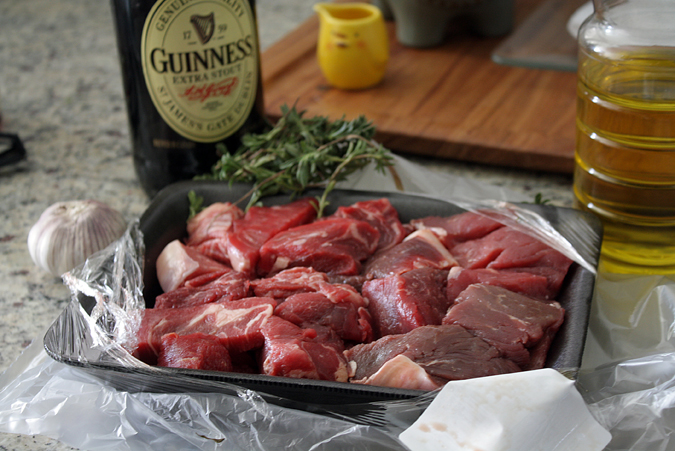 I based my recipe around Jamie Oliver’s version because I figured that guy knows what’s the what when it comes to a steak and Guinness pie.

I used savory in my recipe because I came across it at the Asian market for really cheap and have never used it before.  I tried to smell it to get a sense of what it’s all about, but it was wrapped in plastic.  So I just went with it, scent unsmelled.  It’s an herb, right?  And it’s beef, right?  It’s gonna be okay.

And it was!  Savory is very pleasantly forthright in flavor and would fit in very well among fresh oregano, rosemary, thyme, and sage.  If you can’t find savory (or if it’s too pricey), totally go with whatever strikes you. 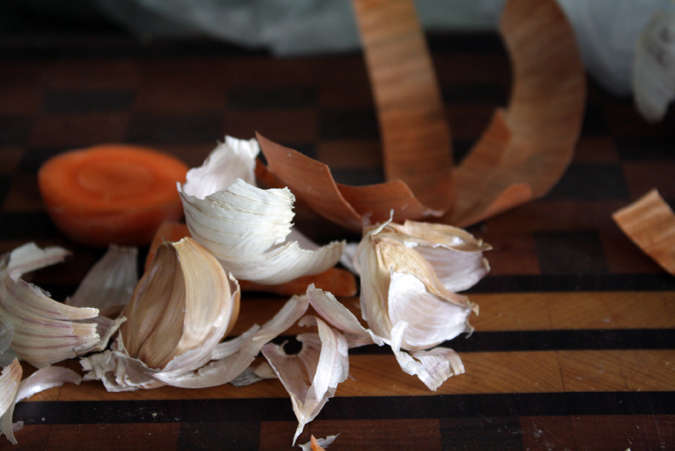 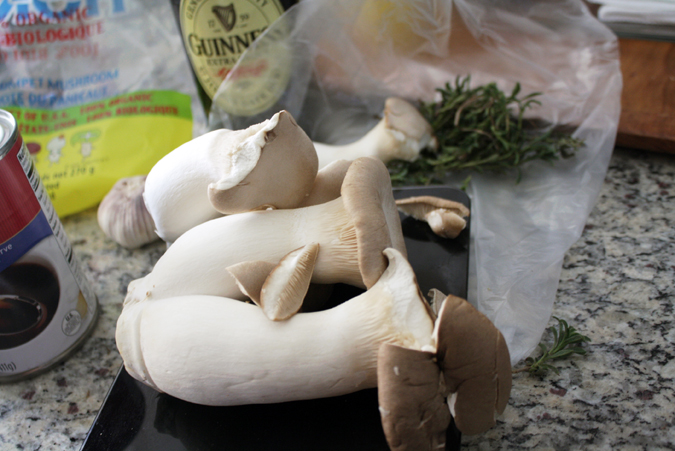 I used honking trumpet mushrooms in the recipe because they’re so meaty and substantial.  And also because we all need to stop being so dependent on those white button mushrooms, am I right?

The steak and Guinness filling takes a few hours to stew, before the meat loosens up enough to relax and lounge among the gravy and root vegetables.  I would say that during hours one through three, stuff will taste alarmingly bitter. Having never made anything with so much beer before, I was a little worried that it’d end up tasting really bitter.  But by the end, the gravy significantly mellowed.  There’s still a short bitter finish to the filling, but it’s pleasant.

I dropped my filling in a crock pot and left that guy going overnight.  The long stewing is beneficial to the flavor, but not necessary.  It can be done in three hours, if you’re pressed for time.  Haha.  Yeah, three hours is lightning fast! 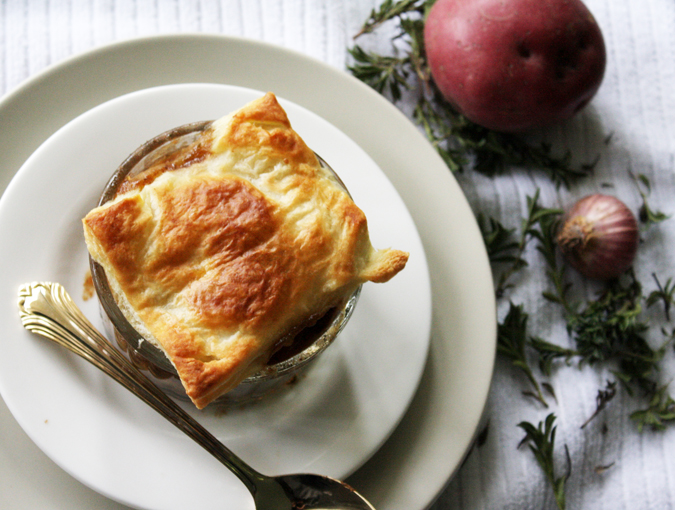 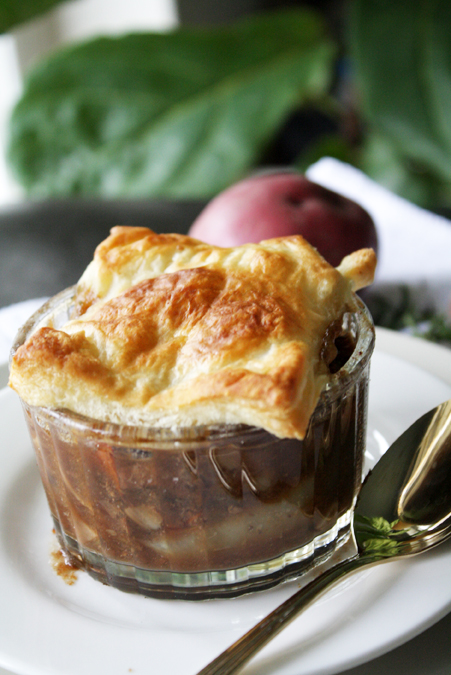 Pepperidge Farm puff pastry sheets are dairy-free.  Apparently?  They refuse to take an official stance on it by denoting it on the packaging.  But there were also not those bold letters that say, “Contains dairy” at the end of the ingredients.  The ingredients list itself was this gnarly list of ingredients that aren’t usually in puff pastry, but I didn’t see anything on there that indicated it was laced with dairy. I’m going to tepidly say that this brand of puff pastry is dairy-free.  If anyone knows for sure, let me know!

Yeah, I topped the pie with a square puff pastry crust because I thought it would be funny. 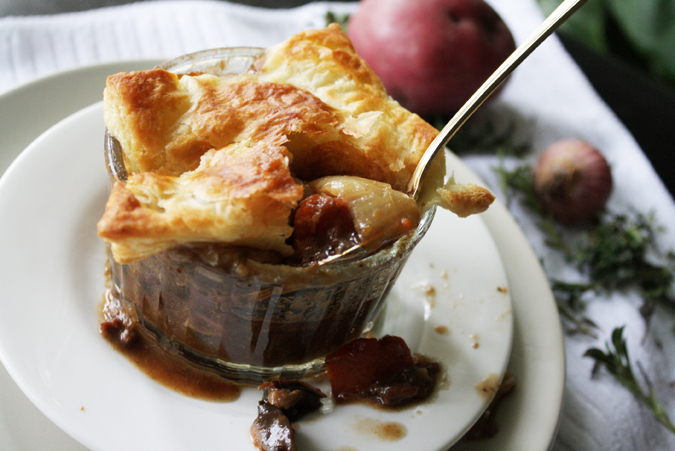